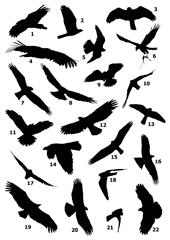 So you thought that Raptor Silhouettes 1 was difficult? Wait until you try Raptor Silhouettes 2! The only clue you get is that the silhouettes are of birds of prey that can all be seen in northeast Spain. Look out for the answers in the BirdingInSpain.com blog.

Free Birding downloads - Something for nothing. While it lasts

However if you order a book, enquire about my guiding services, or use the links then I'll be encouraged to keep the downloads coming. If not...

Spot the intentional mistake and win a free copy of Steve West's “Where the birds are in northeast Spain”!

In one of the checklists there is an intentional spelling mistake (there is probably more than one mistake but only one of them is intentional!). If you are one of the first 3 to spot and communicate it you will win a free copy of the afore-mentioned book, P&P apart.

As a clue, it is in the English names section, and is a bird that has an extra letter added to its name to make another word that can be found in the average English dictionary.

Need another clue? No, that would spoil the surprise.

One good thing about birding in the Canary Islands is that you can go at virtually any time of the year and still find most of the birds that you want to see. By combining just two islands, Tenerife and Fuerteventura, it is possible to see all the endemic species of this archipelago. You may, however, like to visit la Palma, Lanzarote or la Gomera, which are not without interest to the visiting birdwatcher.

There is also much potential interest with seabirds, with Bulwer's Shearwater, Little Shearwater, Madeiran Storm Petrel, White-faced Petrel and Red-billed Tropicbird all possibilities, although good planning and some luck will be required to see any of them.

A checklist for a late spring/early summer visit to Finland and northern Norway. A trip that every European birder should do at least once.

The potential rewards of birding in Finland speak for themselves: Hawk Owl, Tengmalm's Owl, Pygmy Owl, Eagle Owl, Great Grey owl, Ural Owl, Three-toed Woodpecker, Hazel Grouse, Siberian Jay, Pine Grosbeak, Red-flanked Bluetail, Siberian Tit, Smew, Red-necked Grebe, Little Bunting, Rustic Bunting, Terek Sandpiper....However, be warned. Birding in this land of the midnight sun is far from easy and birds can be very few and far between. So either get a guide or prepare to work very hard – remember though, the birds are worth it!

Then you visit the shoreline, and discover the meaning of abundance. White-tailed Eagle, Puffin, Brunnich's Guillemot, Common and Velvet Scoter, Goosander, Eider, King Eider, Steller's Eider, Glaucous Gull, Rough-legged Buzzard, Gyrfalcon, Purple Sandpiper, Arctic Redpoll, divers. And in such numbers that will not allow you to forget your trip to Norway!

Birding Finland and Northern Norway: what a contrast!

This is the home ground of Birding in Spain, and an excellent proposal at any time of the year, although April and May are the most popular months with visiting tours. Combine a Mediterranean wetland with lowlands, gallery woodland, steppes, Pre-Pyrenees and Pyrenees to get as much as you can out of this exciting area.

Some of the birding highlights include:

Waders including Temminck's Stint and Marsh Sandpiper, and the rarer but fairly regular Red-necked Phalarope.

Other assorted highlights like Rock Thrush, Black Wheatear, Ortolan Bunting, Black Woodpecker, and last but by no means least, the stunning Wallcreeper.

An early summer trip to the highlands of Scotland, including one or more of the western islands – perhaps Handa, or one of the inner or outer Hebrides. Combine the rugged solitude of the west coast, with its innumerable lochs and lochans, thriving seabird colonies, white sand beaches, cliffs and imposing mountain peaks, with the more bucolic east coast, with its distilleries, castles, rivers, glens, Caledonian forest and moors – oh! How could I forget to mention the Cairngorms? That spectacular mountain plateau with 4 of the 5 highest peaks in the British Isles and some very special breeding birds.

And then there's the scenery!

This is essentially a checklist for a birder visiting Morocco to the south of Marrakech between the desert town of Erfoud and the coastal resort of Agadir. As such the list includes bird species that can be seen in the High Atlas, in the wetlands and from the headlands along the coast near Agadir, in the desert areas in the extreme south-east of the area, including the famous Erg Chebbi, and at all sites in-between.

Anyone used to birding within the confines of Europe after their first birdwatching trip to Morocco will be left with the indelible impression that Morocco is “another world”. The people and their way of life, the climate, the variety of incredible landscapes and some unique birds; all of these factors work together to constantly remind the visitor that he or she has stepped onto another continent.

Birds of prey are scarce in Morocco compared to in Spain, large numbers of them having fallen victim to widespread and intensive poisoning campaigns. Nevertheless, there are still around 30 very special species of birds in southern Morocco that can't be seen in the Iberian Peninsula or almost anywhere else in Europe.

One could start with the larks for example: where else can the birder see both Temminck's and Horned Lark in the same country? Along with the prized Thick-billed Lark, the spectacular Hoopoe Lark, Desert Lark, Bar-tailed Lark, Lesser Short-toed and Short-toed Lark, Crested and Thekla Lark. Something similar also happens with the wheatears, with Mourning, White-tailed (a common roadside bird in many places!), Red-rumped, Black, Desert, Black-eared, Northern and even Isabelline Wheatears all possible.

Then there are also 4 species of sandgrouse, Lanner and Barbary Falcon, Desert Sparrow, the highly endangered Bald Ibis, Black-crowned Tchagra, Little Swift, and a long and interesting etcetera.

If you can afford 10 days or so to cast your birder's eye on this area then you won't regret it. Oh, another thing: birding Morocco is a lot cheaper than birding Norway!

This is a birding checklist for a short winter break in north Norfolk. North Norfolk is a great place for a birding trip at almost any time of the year, with its large number of Nature Reserves from Snettisham, Holme, Titchwell, Cley etc., along the length of the coast, as well as the famous Norfolk Broads.

Regular winter specialities in this region include Snow Bunting, Shore Lark, Twite, Purple Sandpiper, Rough-legged Buzzard, Waxwing, Glaucous Gull, Velvet Scoter, Long-tailed Duck, Whooper and Bewick's Swan, and of course large numbers and variety of waders, ducks and geese. The more regular of the latter include thousands of Pink-footed and Brent Goose, and smaller numbers of Greylag, White-fronted, Egyptian, Bean and every now and then a beautiful Red-breasted Goose, just to liven things up a little!

Sea-watching is a worthwhile pastime with Red-necked and Slavonian Grebes, Red-throated and Black-throated Divers all likely, while pleasant surprises may include Great Northern Diver or Little Auk.

But the only real way of knowing what is about is to get out there and look for the birds yourself!

This is a birding checklist for a spring/summer trip to Bulgaria; a country that is fast emerging, if not already established, as one of the top destinations for birding in Europe.

Not only does Bulgaria occupy a strategic place on the Via Pontica flyway, ideal for observing the migration of soaring birds, it is also home to important wintering areas for geese, especially the Red-breasted Goose. Many birders however, time their visit for spring, perhaps because it's when Bulgaria and its birds are at their very best.

The highlights of a birding trip to Bulgaria are many. The surprising mountains along Bulgaria's southern border boast one of the best sites in Europe for the dazzling Wallcreeper, in addition to interesting species like Horned Lark, Nutcracker, Grey-headed, Three-toed and Black Woodpeckers, and the elusive Hazel Grouse. In the southeast corner of the country the threatened Eastern Imperial Eagle still manages to hold its own, along with Masked Shrike, Levant Sparrowhawk, Olive Tree Warbler, Barred Warbler and Western Rock Nuthatch. Sites of renown along the inviting Black Sea coast include Atanasovsko, Lake Dourankoulak and Cape Kaliakra, where birding delights include the likes of Paddyfield Warbler, White Pelican, Dalmatian Pelican, Pygmy Cormorant, Pied Wheatear and a host of migrants if your timing is right. Special mention should go to the biosphere reserve of Lake Srebarna on the right bank of the River Danube, truly impressive for its abundance and array of wetland birds.

Thankfully it's a relatively small country and so the visiting birder can plan to see a large part of the wonderful birds that Bulgaria has to offer on a single trip. Although, as always, it's better not to rush.

Extremadura is one of the most popular birding regions in Spain, and such popularity is extremely well justified. Personally I can't remember having seen 5 species of eagle in one morning anywhere at all except in Extremadura.

That happened on one glorious April morning in Monfragüe, now a National Park. But that is far from being the end of the story: in addition to Spanish Imperial Eagle, Golden Eagle, Bonelli's Eagle, Booted Eagle and Short-toed Eagle in Monfragüe it is possible to see 3 species of vulture (Black, Griffon and Egyptian), the magnificent Eagle Owl, Black Stork, Azure-winged Magpie, Red-rumped Swallow, Spanish Sparrow, Blue Rock Thrush, Alpine Swift, and more.

Then there's the dehesa, home of the free range pata negra pig and the cork oak. A unique and beautiful setting in which to look for birds like the Azure-winged Magpie, Black-winged Kite, Rock Sparrow, Orphean Warbler, Hawfinch, etc.

The steppes around Cáceres and, further south, la Serena are home to another range of special birds and as such add a great deal of quality to a birding trip to Extremadura. Here one can find Great Spotted Cuckoo, Great Bustard, Little Bustard, Montagu's Harrier, Collared Pratincole, Calandra Lark, Short-toed Lark, Roller and Stone Curlew.

There are a few interesting wetland sites too, where the visiting birder can seek out more variety in the form of Purple Gallinule, Savi's Warbler, Gull-billed Tern, Penduline Tit, Spoonbill, egrets and herons. And then there are one or two historic town centres ideal for sitting at a terrace bar, sipping an ice coffee while sorting out the Pallid Swifts from the Common Swifts and admiring groups of Lesser Kestrels and clusters of White Storks' nests.

To see these documents you
will need a PDF Reader