From Flix head to Ascó and follow the sign to La Fatarella (T-733). The road winds and climbs past pine woods and olive groves where a short stop at any suitable site should reveal the birds typical of this habitat: Bee-eater, Woodlark, Green Woodpecker (the sharpei race), Sardinian Warbler, Cirl Bunting, Short-toed Treecreeper and Bonelli's Warbler. Glance skywards now and then as the Short-toed Eagle could appear at any point in the itinerary. Shortly the climb up the Serra de la Fatarella begins to offer panoramic views, well worth stopping for and admiring before reaching the village of La Fatarella.

At La Fatarella, join the Ruta de Sant Francesc (San Francisco). This is a narrow road that winds and slowly descends past cultivated and maquis-covered slopes with rocky ledges, embankments, ruins and small farm buildings made of the local stone. Pay attention to the rocky areas, as the Blue Rock Thrush and Rock Sparrow inhabit these parts, while the Black-eared Wheatear prefers the open slopes with low vegetation.

Eventually the road passes the Hermitage of Sant Francesc and shortly after enters the area affected by a forest fire in August 2005. Just before reaching the TV-7411 look out for the Black Wheatear, one of the area's special birds, which with some luck may be found on the rocky crags.

Turn left at the stop sign and follow the quiet TV-7411 towards La Pobla de Massaluca. Further on it is well worth taking the 200m detour to the hermitage of Sant Berrús and the magnificent views it offers over the Ebro and the surrounding lands. Crag Martins breed near the bridge of Berrús and Spanish Ibex have been seen in the area.

At the next junction take the TV-7231 which descends to the river through scrub and pine woods. Look out for Crested Tit, Sardinian Warbler, Dartford Warbler and Southern Grey Shrike on the way down. Stop near the bridge and survey the river cliffs opposite for Griffon Vulture, Peregrine, Egyptian Vulture, Blue Rock Thrush, Black Wheatear and possibly Alpine Swift. Golden Eagle, Short-toed Eagle and Black Kite are also frequent visitors to the area.

The River Ebro - From la Fatarella to Faió Itinerary Map 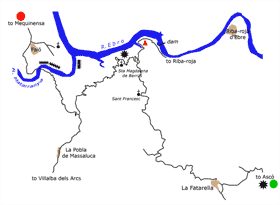 Vital Info: Be sure your vehicle is in good condition before venturing out on this birding itinerary and that you have enough petrol to reach Mequinenza just in case!

Extreme precaution is required so as not to start any forest fire. Do not discard cigarette ends or matches carelessly.