From Cornudella de Montsant head along the C-242 in the direction of Ulldemolins. At less than a kilometre out of the village turn right for the village of Siurana. In the more open areas of small fields and thickets look for typically Mediterranean species such as Golden oriole, Bee-eater, Sardinian Warbler and Cirl Bunting.

Continue along the road, making frequent stops at your own discretion to see the birds of the different habitats. These may include Rock Bunting, Melodious Warbler, Orphean Warbler, Firecrest, Crested Tit, Crag Martin, etc. After some 3km the road bends sharply to the left and a track presents itself on the right. Park and follow this track on foot. Follow the main level track, not the path that climbs up towards the village.

The track follows on to the foot of the cliffs of Siurana and then into the valley of the same name, with the river on the right. Follow on without going down to river, and half a kilometre before Mas d'en Cadi take the track that climbs up to meet the road just before it reaches Siurana.

At the top take some time around the village, looking especially for the Red-rumped Swallow around the cliffs, and Golden Eagle and Bonelli's Eagle in the skies. Other species that can be seen here include Blue Rock Thrush and Black Redstart.

From the village walk back down the road, either following the road itself or taking a path that descends through woodland to where you left the vehicle. 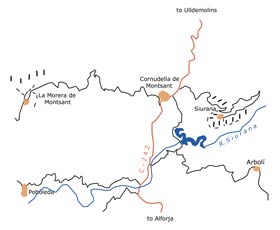 Just like being in the Prades and Montsant Ranges: listen to the natural sounds of the Montsant

Prades and Montsant :
Montsant is a Mediterranean mountain range which is home to some interesting birds and some equally interesting wine and olive oil!

Morera de Montsant Itinerary :
Combine driving with walking and birding to enjoy the scenery of this attractive region and to see a good variety of Mediterranean birds.

Vital Info: There are spots along the River Siurana where it is possible to have a refreshing swim, even in the summer.

Ask the local people about the legend of the Queen's leap.