Take the road leading northwards out of the village to the observation tower soon encountered on the right. On the way look out for Squacco Herons in the ricefields. This observation tower offers views over l'Encanyissada lagoon and the possibility of seeing species such as Little Bittern, Purple Gallinule, Red Crested Pochard, Caspian Tern, Black-winged Stilt, Marsh Harrier, Greater Flamingo, Fan-tailed Warbler and Great Reed Warbler. It is also worth taking a walk along the road to look and listen for Savi's Warbler and Reed Bunting (the native witherbyi race) among the reeds. 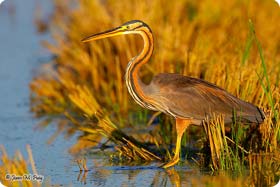 It is also worth stopping at the second observation tower as, in addition to the previously mentioned species, there may also be Great White Egret, Gull-billed Tern and Bluethroat (during migration or winter).

Continue towards the coast, stopping at the Sant Antoni saltpans. This is usually a very interesting spot for gulls, terns and waders. In the breeding season there are numbers of Sandwich, Little and Common Terns, while small groups of Caspian Terns may be found at any time of the year. Slender-billed, Audouin's and Yellow-legged Gulls are almost always present, while the most commonly found waders include Avocet, Grey Plover, Bar-tailed Godwit, Little Stint, Curlew Sandpiper, Dunlin, Greenshank, Redshank, Spotted Redshank, Ruff, Kentish Plover and Ringed Plover. Knot and Marsh Sandpiper may be found on migration, while the Iberian race of Yellow Wagtail breeds in the low scrubby vegetation. 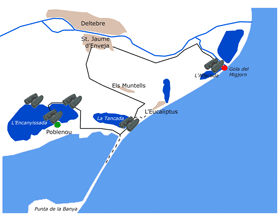 The Ebro Delta North Itinerary:
Visit the northern half of the delta to see large flocks of waders, ducks, gulls and terns, especially at lo Garxal and the Fangar bay.

Vital Info: Birders please respect the no entry signs on private property, especially at the saltpans.

If out birding and you venture along the Trabucador in stormy weather make sure you don't get stranded!