Set in the province of Tarragona, these Mediterranean mountain ranges are an interesting prospect for a day's birding trip from a nearby coastal resort, and could also be a first stop for birders flying into Reus.

It's an attractive area with a low population density, winding roads, picturesque villages on hillsides or even on cliffs, and wines and olive oil of its own special character.

Montsant would be an ideal site for birders interested in gastronomy and walking, especially for those who don't need snow-capped peaks.

Bird Species that can be found in Prades and Montsant Ranges:

Just like being in the Prades and Montsant Ranges: listen to the natural sounds of the Montsant 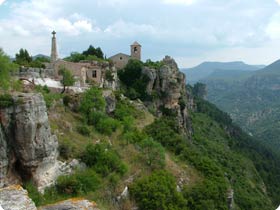 Siurana Itinerary :
Siurana is a small village perched on the cliffs. If that's not enough for you there's also Red-rumped Swallow and Bonelli's Eagle on this birding itinerary.

Morera de Montsant Itinerary :
Combine driving with walking and birding to enjoy the scenery of this attractive region and to see a good variety of Mediterranean birds.

Vital Info: This area is the home of the famous Priorat wines. It also produces excellent olive oil and hazelnuts.