The area between Alcolea and Candasnos to the south forms the easternmost part of the Monegros. Set in the middle Ebro valley it is one of the driest regions of Spain, although in the last decades much of it has been converted into irrigated farmland.

That notwithstanding there are still important populations of steppeland birds, including very small numbers of Dupont's Lark. The small lagoon at Candasnos, the riparian woodland at Ontiñena and Alcolea, and the spectacular sandstone cliffs of Alcolea all add to the diversity of both landscapes and birdlife.

Bird Species that can be found in Alcolea and Candasnos, Monegros:

Just like being in the Monegros, Alcolea and Candasnos: listen to the natural sounds of the Monegros

Alcolea to Candasnos Itinerary:
Search for dryland bird species and then visit an interesting wetland at Candasnos or the spectacular sandstone cliffs at Alcolea. 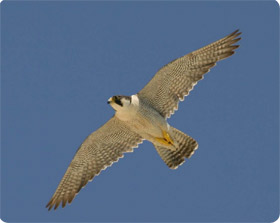 Vital Info: At Alcolea it is possible to bird the road along the base of the sandstone cliffs, or to birdwatch from the track that leads to its heights.

Many new tracks now dissect parts of this birding zone, in preparation for the establishment of irrigation.