Belchite Steppes and the River Ebro

Starting point: Belchite
Time: At least half a day

The steppeland to the east of the town of Belchite is a prime attraction for birders hoping to track down that elusive and highly prized avian gem, the Dupont's Lark. Fortunately for all a healthy population of this species exists on the SEO reserve of el Planerón, with smaller populations in nearby areas.

If your main objective for visiting the area is to see the Dupont's Lark then a dawn visit is the recommended option. If that is not possible then a late afternoon/evening visit could also reap rewards as the larks often burst into song for a short period prior to nightfall.

From Belchite head along the CV-306 towards Codo. About 4.5km after the village of Codo turn left onto a wide dirt track, opposite a small concrete construction and signposted “SEO – El Planerón”. Follow this track for approximately 1.5km to the brow of a hill and park.

Dupont's Larks inhabit the sparsely vegetated areas on both sides of the track and usually break into song just before dawn. Lesser Short-toed Larks are abundant, while other species usually detected in the general area are Stone Curlew, Tawny Pipit and Black-eared Wheatear. Thekla Larks can be seen on the rockier, sloping terrain and small groups of Black-bellied Sangrouse are usually detected as they fly by, giving their typical bubbling call.

Make your way back to the road, looking out for Little Owl on any farm buildings or stony ruins, Calandra Lark and Short-toed Lark, and both Pin-tailed and Black-bellied Sandgrouse in the surrounding fields. In the April-May and late August-October periods it is also worth keeping an eye out for migrating Dotterel.

Follow the road back towards Belchite. The original town of Belchite was levelled to ruins in the Spanish Civil War, mostly by German Stukas, and what is left now stands as a haunting monument. A short walk around the ruins could reveal Blue Rock Thrush, Crag Martin, Spotless Starling and Sardinian Warbler.

From here head northwards along the C-222 to the Lomaza reserve at km11. Park in the car park and follow on foot. Apart from offering another opportunity of Dupont's Lark and Lesser Short-toed Lark, other species like Spectacled Warbler, Pin-tailed Sandgrouse, Black Wheatear, Golden Eagle, Griffon Vulture and Egyptian Vulture may also be seen. 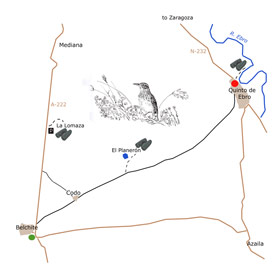 Sites worth visiting after Birding Experience in Belchite Steppes :

Belchite Steppes:
The visiting birder is here for the Dupont's Lark on the SEO reserve. However, there are enough birds to keep the visitor busy for a whole day or more.

Vital Info: In reserve areas using playback to entice the Dupont's Lark closer is not recommended and in fact is rarely effective for birding purposes.

Patient scanning usually gives birders the best results. There is a SEO visitor centre in the town of Belchite. Take a look.