Time: a full day
Starting point: The town of Deltebre.

Head east out of the town to join the T-340. Follow the road until a sign indicates “Mirador/Restaurant Canal Vell” on the left. Here there is an observation tower overlooking the southern tip of the Canal Vell lagoon. Night Herons can be seen here, as well as Greater Flamingo, Great White Egret, Bittern (on migration), Little Bittern, Great Reed Warbler, Fan-tailed Warbler, Black-winged Stilt, Kingfisher, Marsh Harrier and a variety of ducks.

Return to the T-340 and follow the indications to Riumar. At the eastern edge of this beach resort is Lo Garxal – a shallow lagoon usually dotted with abundant terns and waders, often including Marsh Sandpiper and Spotted Redshank. Water Rails breed in the reedy areas along the southern edge while the inhabitants of the dune slacks include Lesser Short-toed Larks and Collared Pratincoles. Besides being a good area for observing migrant passerines and Little Gulls, in recent years Crested Coots have become quite regular visitors. 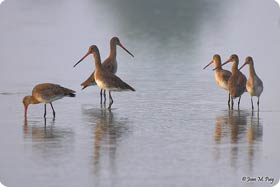 Head back to Deltebre to join the T-3451, which leads to the Platja de la Marquesa. This beach is the spot for conducting a seawatch in the hope of seeing skuas, shearwaters, seaduck and other seabirds according to the season. In the winter months Mediterranean Gulls pass by in their hundreds, as do Black Terns in late summer.

From here a track leads to the Fangar lighthouse. The huge, flat sandy area past the dunes is a major breeding area for terns and Kentish Plover, while on the bay side there will often be large numbers of waders, terns, gulls and ducks.

The Ebro Delta South Itinerary:
A one-day birding itinerary south of the River Ebro to see a great variety of birds including Collared Pratincole, Savi's Warbler, Caspian Tern, and many more.

Vital Info: If birding along the track to the lighthouse at the Fangar don't venture off the track with the vehicle as it is likely to get stuck in sand or mud.

Public access to the Illa de Buda for birding or other purposes is permitted only by prior arrangement.