A walk along the track which divides low, sandy cliffs, rocky slopes and olive groves on one side, from the reedbeds, gallery woodland and flood meadows on the other, will show a stark contrast between the communities of birdlife inhabiting each habitat. Blue Rock Thrush, Rock Sparrow, Thekla Lark and Sardinian Warbler can all be seen on the sunny slopes flanking the river, while the olive groves are home to the Bee-eater, Hoopoe, Woodchat Shrike, Serin, Crested Lark, Wryneck, Cirl Bunting and Spotless Starling.

In spring and summer the reedbeds burst with the songs of the Cetti's, Reed and Great Reed Warbler and the Water Rail. There is a small breeding colony of Purple Heron, and even the Little Bittern has bred in recent years. Other species include Little Egret, Marsh Harrier, White Stork and Black Kite. The hide overlooking the newly created pool is one of the best places in the region for spotting the dazzling and emblematic Kingfisher. 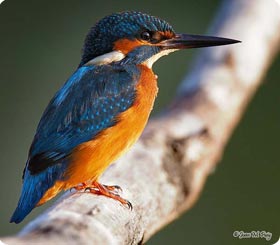 Coming from Flix cross the bridge over the River Ebro and use the slip road 50 metres ahead to turn round, and then take the track on the right just before the bridge. It will be necessary to combine some driving and walking along this track to sample some of this area's extensive birdlife. Then drive on to the Mas del Director, the reserve's information centre, and walk along the path and a wooden walkway to reach the hide overlooking the pool. 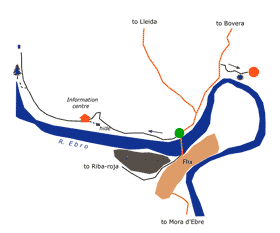 Vital Info: Visit the Mas del Director (reserve information centre) for birding information or to arrange a guided visit, and the stork holding compound past the gallery woodland walkway.

The white horses on the reserve are from the Camargue.

It is worth spending some time looking for birds among the olive groves.