The area known as the Monegros is the arid heart of the Ebro valley. It is open, flat or gently undulating terrain largely given over to grazing and extensive agriculture. Despite the fact that in recent years wide-reaching irrigation schemes have bitten big chunks out of the dryland areas, there are still large tracts of land where the characteristic steppe species of Spain can be found.

The Monegros Desert itinerary is centred around the town of Bujaraloz and offers the visitor an exciting combination of birds and habitats, such as the relict yew woodland of la Retuerta, the many salt lakes (usually dry) dotting the map to the south of the town, stony fields and arable land. 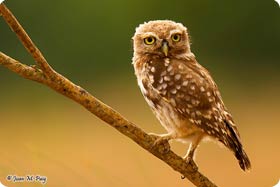 Bujaraloz, Monegros Desert Itinerary:
Near Bujaraloz a large variety of steppeland species can be seen, including sandgrouse, bustards, larks, warblers and birds of prey. 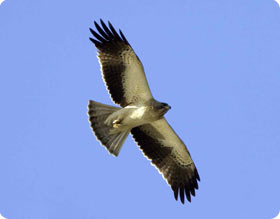 Vital Info: Looking for steppeland birds can be a difficult task. Often the best approach is to drive short distances making regular stops to scan with binoculars.

Be careful not to get stuck on some of the minor tracks when birding after heavy rains. The area is not well adapted for absorbing much water!