Starting point: the C-12, at the sheep farm to the north of Alfés
Time: 2-4 hours

Turn off the C-12 and follow the direction signposted “Aeròdrom”. Small numbers of Lesser Kestrel breed in the area and may be seen here as they shuttle between their nesting and feeding areas. Black Kites are frequent in the summer months due to the presence of the rubbish dump to the west.

Follow the track up the slope and scan the fields before the motorway. Apart from Calandra Larks and the now scarce Short-toed Lark this is also an area favoured by Pin-tailed Sandgrouse. Detection may be aided by listening out for their distinctive flight calls.

Cross the bridge over the motorway and follow the track downwards and then up the rise. The small patches of pinewood here often attract Great Spotted Cuckoos in the spring and the rocky escarpments are home to Thekla Larks and the occasional Rock Sparrow.

Most of the large flat area that opens up at the top of the rise is dominated by an aerodrome and thyme fields. Until recently this was the sole site for the Dupont's Lark in Catalonia, but sadly the species has now become extinct here. The fields around the edge of the aerodrome attract small trips of Dotterel from late August to October. 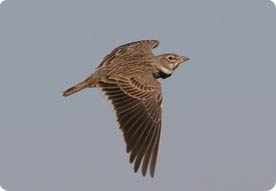 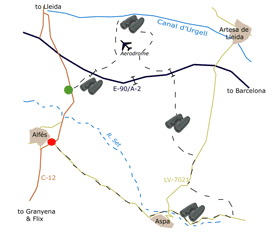 Drylands of Lleida Bellmunt - Belianes Itinerary:
A short birding trip to the drylands of Bellmunt can be very rewarding. Apart from steppeland birds it is also very good for birds of prey.

Vital Info: A birding visit in May could produce sightings of Red-footed Falcon, while Dotterels occur regularly on migration between late August and early October.