Belchite and the River Ebro

The SEO-Birdlife reserves of el Planerón and la Lomaza are both a short drive from the small town of Belchite. Every spring birders come from all over Europe, and even further afield, hoping to set eyes on the famed Dupont's Lark, which maintains a sizeable population in the area. With a little perseverance they usually spot this and other steppeland gems against a backdrop of authentic Spaghetti Western scenery. Combine a visit to the steppelands with a walk along a meander of the nearby River Ebro to see a surprising variety of species in a short length of time.

Sites worth visiting after Birding Experience in Belchite Steppes:

Bird Species that can be found in Belchite Sreppes: 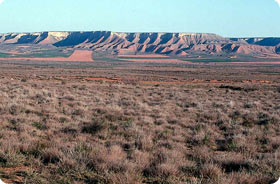 Belchite Steppes and The River Ebro Itinerary:
Combining a visit to see the specialities of this excellent dryland site followed by the birds of a River Ebro meander is a winning formula.

Vital Info: Mosquitoes and other biting bugs can be a problem when birding in this area, so come prepared!

Respect the signs and watch birds from the tracks and paths.