Starting point: Barruera.
Time: Depending on the option chosen.

From Barruera turn right and cross the river heading towards Durro. Dipper may be seen from the bridge. Once at the village of Durro follow the track that leads past the hermitage of Sant Quirc. This area of pastures and scattered bushes is good for Red-backed Shrike, Cirl Bunting and Yellowhammer. The hermitage itself is a very attractive Romanesque construction and also a good viewing area for raptors such as Griffon Vulture, Short-toed Eagle, Lammergeier, Egyptian Vulture and Red Kite.

From here onwards the track enters dense pinewood and becomes more uneven, but is passable with care. Time should be taken along this stretch of the itinerary (either on the way up or down), as the woodland here offers the possibility of encountering Black Woodpecker, Ring Ouzel, Crossbill, Bonelli's Warbler and Crested Tit.

As you emerge from the forest there are panoramic views, and this is also a good area for encountering Citril Finch and Water Pipit. Spend some time here and you may also see Golden Eagle and Peregrine Falcon.

The next port of call is the dam of the Estany de Cavallers at the head of the valley, although if on a winter visit it may be worth the effort to make a detour to the ski slopes of Boí-Taüll where Snowfinches occur, especially during periods of bad weather.

Drive on past the Caldes de Boí spa to the foot of the dam itself. Apart from Crag Martin and Black Redstart,  the views and the interesting plants in the relatively ungrazed areas, the main attraction of this area is the possibility of seeing Wallcreeper. This feathered gem has bred in the walls of the dam itself, although its presence here is not guaranteed every year, especially it seems, in years of drought. But it's worth a look just in case!

2. Birding In the National Park

An incursion can be made on foot from the parking area and the information hut, located at the beginning of the minor road on the right before reaching the Caldes de Boí spa. However, the best option is to take a 4x4 taxi from here to Estany Llong and to walk back to the car. The range of species is basically the same as those that can be seen around Durro, with the addition of Marsh Tit, but it's good to walk and enjoy the views too. 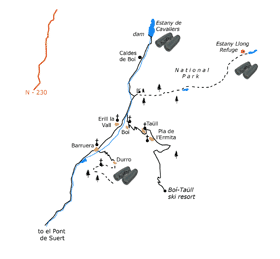 Aigüestortes NP west:
The World Heritage Romanesque churches of the Boí valley are the backdrop to this side of the Aigüestortes National Park. 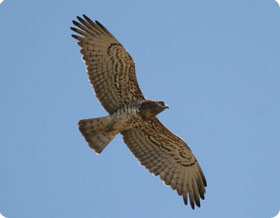 Vital Info: Don't forget the camera!
It's forbidden to pick plants and catch any kind of animal in the national park.

The park can get very busy in July and August.